Why am I posting so much about our horse’s feeds? 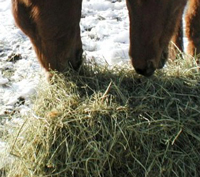 I’ve had a lot of emails but since I’ve started posting about GM feeds, I have had thousands! Within 3 days of posting the GM Alfalfa issue, I had more emails and responses and downloads of the brochure than all the other posts on this blog! (I have been answering the questions as fast as I can: sorry for the “blanket” response to most but I’m getting overwhelmed with emails). I’m proud of all of you! We care for our horse from the inside out! You are paying attention!

“We care for our horse from the inside out.” April

Since everyone is listening, I will add another important post on feed. This one deals with chemicals. While our horses rarely see pesticides on our hays, it’s important to know where your hay comes from. Growing next to fields that use sprays (especially aerial spraying) means your hay crop will be contaminated.

A few years ago, I watched a farmer spraying a crop of peas. The cloud of insecticide drifted over to a horse facility and landed on 2 ponies and a quarter horse belonging to a friend of mine. In less than 6 months, the quarter horse lost weight and died. The 2 ponies lived, but one is still suffering.

The vets concluded that it could have been from vaccines. While I agree (as I don’t like vaccines), I did watch the insecticide cloud drift for 3 days in a row over to their small field. The other horses were not directly in the drift. The vets dismissed my findings.

END_OF_DOCUMENT_TOKEN_TO_BE_REPLACED

I know I may not be a popular horse person with this, but it’s time we all saw the dragon for what it is. Once again, Monsanto is buying people’s favor, one desperate industry at a time.

A therapeutic riding facility in Henry County, Tennessee, has received $2,500 as part of a program administered by the Monsanto Fund.

END_OF_DOCUMENT_TOKEN_TO_BE_REPLACED

Genetically Engineered Alfalfa and Your Horse 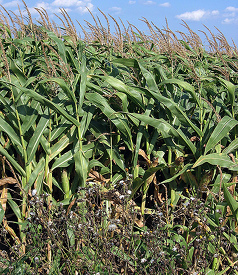 A new product is about to be force fed to your horse that you need to know about: Genetically modified alfalfa.

In Canada and the US, 2011 is the first year for GE alfalfa planting. For those asking why a horse owner should care, I have written the details so that you become educated on this. Feeding horses should be as important as learning how to ride and train.

What is GE Alfalfa? Monsanto has altered (in a lab) the alfalfa plant to be pesticide resistant. That means, every cell in the plant will produce a pesticide strong enough to kill bugs when they bite into it, AND allow farmers to spray pesticides as they need.

Non-GE Alfalfa (what our horses have eaten for decades) does not need to be sprayed. It rarely has weed issues or insect problems. The crop is often grown in-between other crops to bring nitrogen back to the soil. It has no need of modification, as it already is a wonderful plant just as it is!

Now, your horse will be exposed to chemicals two ways: through the cellular level in the plant, and through spraying, a process not necessary in the past. In short, there was no need to modify alfalfa. GE alfalfa was also not intended to be fed long term to any animal.